Two wild quail nests have been found at the Sim Place site where wild Northern Bobwhite quail from Georgia were released two months ago!

Photo by Will Macaluso, University of Delaware.

“We are thrilled about this news of confirmed nests,” said John Parke, Stewardship Project Director of NJ Audubon. “Wild quail had been extirpated from Pinelands since at least the late 1980’s, so knowing that the translocated quail are adapting to the site and are breeding demonstrates that forest stewardship, coupled with translocation, can help restore quail to the NJ Pinelands.” 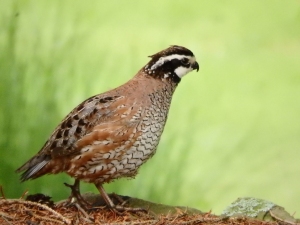 Project researcher and graduate student Will Macaluso of the University of Delaware found the nests while radio tracking the released birds at the study site. “There are fourteen eggs in the first nest and one of the radio collared males was incubating them when I found it,” said Macaluso. However, they have yet to count the number of eggs in the other two nests. “They don’t want to disrupt the nesting females sitting on the eggs,” John says.

According to the release issued by New Jersey Audubon:

Typically Northern Bobwhite incubate their eggs for 23 days, leaving the nest for only brief times to feed. After the eggs hatch, the female, or hen, broods the young briefly and then leads them away from the nest for rearing. Hens do not feed the young. Instead the hen will lead the chicks to places where they can find insects (not seeds) which will form the bulk of their diet as they grow. Often both parents accompany the young.

So we can look forward to even better news in about a month!